Heroes and the Manas National Park: A story par excellence

The Manas National Park (MNP) has been the home of several rare and endangered species, including tigers, rhinos, swamp deers, and different species of birds. 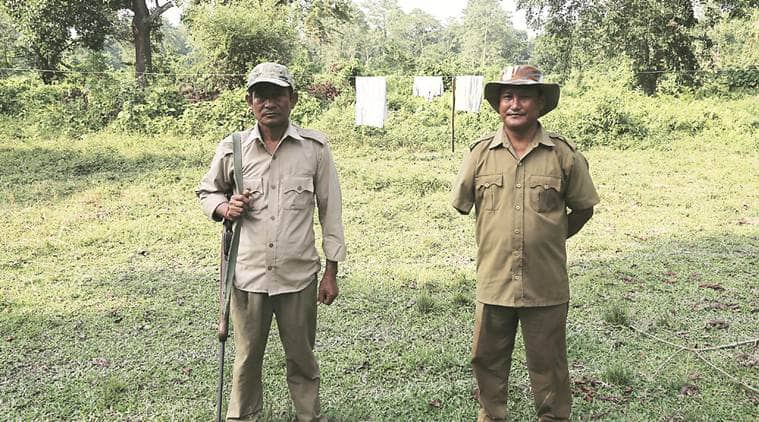 IN THE 1990s, Budheswar Boro was a “poacher” at the Manas National Park (MNP), a UNESCO World Heritage Site forest stretching across 850-sq km on the Indo-Bhutan border in Assam. He lost his right hand in 1998 after a injured wild boar, which he had shot at, charged back at him.

Boro, 48, still carries a rifle and spends the day in the forest — but as a “conservation volunteer”. He is a member of the NGO Manas Maozigendri Ecotourism Society (MMES) and, along with three other former poachers, assists an official forest guard in keeping vigil inside the MNP.

For Boro, and scores of rehabilitated former poachers like him, every step towards redeveloping the MNP is a significant achievement — for instance, on October 5, authorities at the MNP announced the birth of the 37th rhino in the park.

The birth is significant at Manas, which was ravaged by insurgency and political instability in the 1990s, plummeting the population of one-horned rhinoceros to zero in 2002, from around 100 before 2000.

This revival at MNP, which falls in the Bodoland Territorial Area Districts (BTAD) — is the result of a rhino translocation process that started a decade back and an effective community engagement programme that has seen scores of former poachers, like Boro, turn into conservation activists.

“The backbone of this revival has been the support from the community and the better law and order situation. There are at least six NGOs, comprising 135 conservation volunteers, many of whom are former poachers who help the forest department in maintaining the park,” says Sarma.

The MNP has been the home of several rare and endangered species, including tigers, rhinos, swamp deers, and different species of birds. The MNP borders Bhutan on the north, and the forest stretches into the neighbouring country for over 1,000 square km. During the animal census, data by India and Bhutan is cross-checked and “trans-boundary” animals are indicated.

“With the formation of Bodoland Territorial Council (in 2003), student leaders of the All Bodo Students Union (ABSU) made us understand that this was our forest and we would be benefitted if we protect and develop it,” says ex-poacher Boro.

Kalicharan Basumatary, president of MMES, says the organisation was formed in 2003 and has 49 active conservation volunteers of which at least 10 are former “hardcore poachers” and a few illegal loggers.

“The most devastating period for the MNP was in the 1990s when political instability, militancy and disorder in administration in the region had led to a complete drop in forest protection and conservation measures. Moreover, there was rampant corruption. Once a political solution was reached, efforts were taken to make the community understand the value of the MNP,” says Basumatary, a former activist of ABSU.

“Members of the ABSU reached out to people and made them aware of the importance of the forest. People who were into poaching surrendered and at least 80 guns were deposited to officials soon after,” he says.

“Manas is on its way to recovery and fast regaining lost glory,” says a spokesperson of Assam’s Forest and Environment Ministry.

“The process was to keep the rhinos in different places to reduce the chances of natural calamities wiping out a single population. Manas has a good grassland habitat and since the overall protection scenario has increased, putting rhinos back to Manas and other such areas in Assam was felt necessary,” says Bibhab Kumar Talukdar, a member of Rhino Task Force formed by Assam in 2005 to give effect to Indian Rhino Vision 2020, and a member of the “Translocation Core Committee”.

Initially, two committees under Rhino Task Force were constituted — one, to look at the condition of habitats in release sites and the other, to enquire into the security aspects of release sites. Talukdar says that based on the reports of the two committees, rhino translocation in Assam started in 2008 with two rhinos captured from Pobitora and translocated to MNP.

For updates like this, and what the Chief Minister Sarbananda Sonowal's Leadership has achieved for the green life and the forgotten beings in our ecosystem join the converstaion @ManuheManuhorbabe1 on Twitter and on Facebook!