In a social media hyperworld, Assam Police has managed to form a bond with the citizens through the digital platform. Assam Police’s social media cell is helping curb dissemination of fake news via Whatsapp while also gathering and spreading vital information from its Facebook and Twitter accounts.

“Our social media campaigns are part of a recent initiative by the Assam Police towards positive engagement with the citizens called ‘Nagrik Mitra’. The ‘SMART Social Media Center’, is part of a series of measures set in motion by Leader Sarbananda Sonowal, Chief Minister of Assam, to modernise and transform the Assam Police into a people friendly and service centric force,” Harmeet Singh additional director general of police (ADGP) and social media cell chief said.

At present, Assam Police has over 17 thousand followers on Twitter, more than 77 thousand Facebook followers and over four thousand Insta "followers". The police force has plans to increase its presence with a Reddit account, along with hosting “Ask me Anything” sessions.

The need to be proactive on the digital platform was brought to the forefront after the department was lambasted for their inability to curb fake news. Back in June 2018, two Assamese youngsters, Abhijit Nath and Nilotpal Das, were lynched by a mob in Karbi Anglong, after a WhatsApp post tagged them as child snatchers.

Post the lynching, Assam Police rolled out its sensitisation campaign to educate cititzens about fake news, and encouraged them to share information with the Police instead of taking law into their own hands.

“The idea was to engage with the people positively and it worked. We were able to restrict the rumors floating on social media in record time and apprehend/counsel many people involved in spreading hate,” ADGP Singh said. “Since then, we receive more than 20-30 intelligence inputs a day from the citizens,” he added.

In one such instance, a person belonging to Meghalaya tweeted about his car being stolen from Baihata, Assam. Within 57 minutes Assam Police recovered the car and arrested the people responsible for the crime, with the entire interaction taking place on Twitter.

Similarly, a team from Facebook India contacted Assam Police last year regarding a youth who wrote about her intention to commit suicide. The department was able to save the girl and set up counselling sessions for her.

The department has further expanded its twitter reach with each district constantly monitoring the twitter handle for updates, news and complaints. It was the Guwahati district police who initiated the Kabir Singh campaign which helped in seizing illegal drugs. 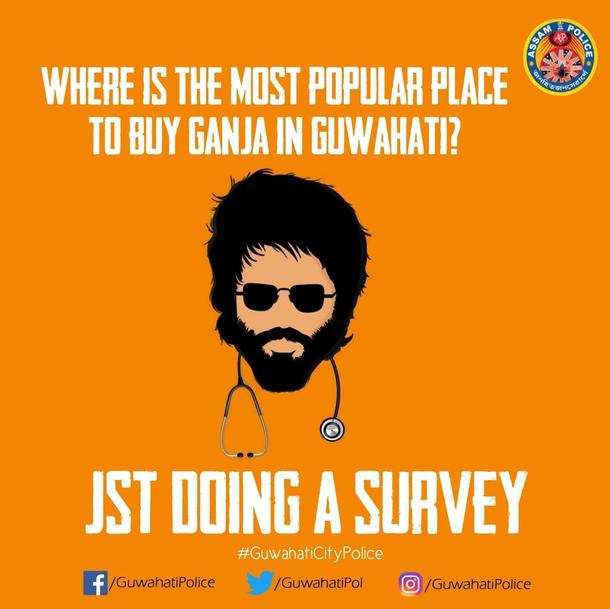 At present, the department has 12 young net-savvy police constables handling the social media with the help of a creative consultant Saliq Khan.

Sanctioned by the central government, the police department will soon launch NEPOL- North East Police app which will connect the police force, from SHO level up to DG level, of the north-east and aid in coordination in the north-eastern region. Conceived by the chief minister Sonowal, there will be a dedicated app, a website, as well as a messaging board which will connect all the police stations’ of the north-east. Hopefully, NEPOL would help spread Twitter best practices to other police forces in the region. ManuheManuhorbabe is an attempt to tell stories that matter. Tag us @ManuheManuhoebabe1 on Twitter and on Facebook.